Though this weblog isn't technically about food, I seem to do a lot of posts about food. There's a reason for that. Food is something we deal with daily. Preparing food is a skill. It is a skill that can be learned and too many kids this day and age have missed most of the classes they were offered.

One of the benefits of learning to cook your favorite meals is that you can eat well at home and you don't need to ship your mother cross-country every time you want that favorite dish. I learned to cook passably well by helping my wife make meals. She learned from her grandmother and mine and developed her own dishes to a level of artistic skill I cannot duplicate. I can get in the neighborhood, but have yet to match her. She on the other hand can cook right up to the grandmothers' level and, in some cases beyond.

Her mashed potatoes are legendary. Here are the basic "secret ingredients". Getting the flavor right is a matter of adding a bit here and a bit there until the taste is right.

WARNING:  These are not diet taters. They are a treat for Sunday or Sabbath dinner and holidays. Eat these too often and you'll find yourself weighing 300 pounds and coping with bad knees.  You have been warned.

Equipment:
Instructions:
Because potatoes are not all the same size, absolute measurements of ingredients are not really practical. Mashed potatoes are an art form, like dance or story-telling. It takes practice and the only way you know you've got it right is by tasting it till you get all the flavors balanced just so.

My son Matt is back in Texas and misses his Mama's cooking. So, at his requested, I posted this to go with my earlier post on Barbecue Tender-Bits as these two dishes and a good salad with maybe some broccoli and my grandmother's homemade rolls make up his favorite meal. The next food post I'll do is my Honeymama's homemade roll recipe. Till then, here's a passable wheat roll recipe you can make in your bread machine that are pretty good till the real thing comes along.

I also posted this recipe because really good mashed potatoes are so seldom seen anymore. I figure if you're going to get fat, it's way better to do it with this kind of food than on two dollar hamburgers. Hamburgers fill your belly. Mama's Mashed Potatoes fill your soul!

The Install That Never Ends

My computer has been trying to stall the same two Microsoft Netframework updates for about a month now. It's been more of a nuisance than a real problem. It slows down shutdown and takes up memory space.  I finally decided to do something about it, though.

Apparently Microsoft built Net Framework one version on top of the other. You can install a later version the first time you install it on your XP operating system. The problem is, the later versions don't include some elements from the first versions that they need to install updates later. If you didn't install 1.0, then 2.0, then 2.5 Sp1, then 3.0, the 3.5 Sp1, then 4.0 ad infinitum you can't get past the Net Framework 3.5 Sp1 update with the XP updates. Depending on which version you skipped, you could wind up reinstalling up to seven updates that I know of.

I took out the whole Net Framework manually (a serious pain in the buttocks) and then reinstalled starting with version 2.0.  I managed only to reduce the number of rotating updates from seven to two.

XP claims it's installing the update. It shows the little bar graph thing and even tells you when it's "all finished".

As soon as you reboot the computer, there they are. Lying in wait. Begging prettily to be installed.

Like the intensely irritating Lois and Bram kid's tune, "The Song that Never Ends", it just goes on and on my friend.  I discovered that the only thing you can do is remove the enitre Net Framework and reinstall each piece from 1.0 on.

I found two bits of software that help.

The second tool is aSoft's .Net Version Detector.  The file unfortunately will be saved on your computer with with the same name as a notorious malware program.  Be sure and get your copy from the aSoft link to make sure it's the good one.

.Net Detector checks to see which version of Net Framework you have and gives you a button beside the list of versions in the version detector window. The buttons take you right to where you need to go to download that version. Simply run the tool and start at the top downloading the files and installing each successive version.

You should stop having trouble with the update after that.

Good luck.  When you get done, give yourself a nice reward for a job well done.  You deserve it. I bought myself a sleek new mouse. 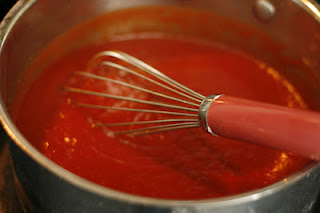 If you ever wanted to try making your own homemade ketchup (or catsup if you'd druther) without all those alphabetical ingredients in it, here's a recipe that lets you lose the vinegar and the polysorbate idunnowhatnheckizzinhere.

Best of all there's no cooking involved unless you want to make a really big batch and put it up in Mason Jars for the winter. You can make this with fresh garden tomatoes by peeling, seeding and whizzing up your tomatoes into a sauce and using the fresh sauce seasoned or unseasoned. The ketchup is pretty well seasoned already.

Pour into a mixing bowl the following:

Mix it all up, pour it into jars and store in the refrigerator. You can use the water bath canning process to seal the catchup in Mason Jars if you're making a large batch and want it to last a while. Just make sure to follow directions.  The jars full of ketchup should be boiled without lids for 5 minutes at seal level to 3000 feet, 10 minutes from 3000 to 6000, 15 minutes from 6000 to 8000 and 20 minutes at 800 to 10,000 feet.  Any higher than that and you probably shouldn't be boiling stuff and using up the oxygen. 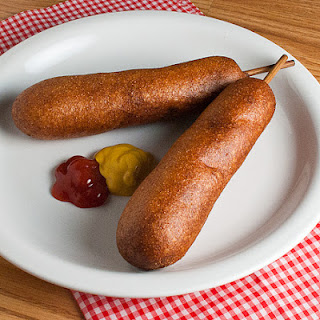 There are all sorts of recipes out there for corn dogs, but most are for a family-sized event and most require far more ingredients than you really want to fool with. Here's the dead easiest way to make enough corn dogs for a Superbowl, World Series or Final Four. A word of warning. You want to position the Fry Daddy where you can see the TV. The guys will keep you busy. I personally can eat 10 or 20 all by myself.


Here's what you need:

Fill the Fry Daddy about 3/4 full - enough to cover the entire wiener.  Plug it in and let the oil heat up while you make the batter.

The Batter
In a big mixing bowl, dump a regular size box of pancake mix and 1 box of corn meal muffin mix. Pour in water and whisk it up till the batter is smooth and not too thick, not too thin.

Wiener Prep
Wiener preparation is the secret to delicious homemade hot dogs. You have to thoroughly dry off the wieners. I use paper towels myself. Wet wieners prevent the batter from adhering to the dog long enough to cook.

Cooking
Skewer the dried wieners on the corn dog sticks. Dip them into the batter bowl and make sure they are thoroughly coated with batter. Lift them from the batter one at a time, letting the excess batter run off.  Set each dog gently into the Fry Daddy. Put them in one at a time and allow the outside to cook enough so that the next dog you put in won't stick to the first one.  I hold them by the stick for about 10 to 15 seconds to allow the batter to skin over.  I like to put them in from right to left so I know that the one on the right is always the one ready to come out soonest.  Let them cook till they are golden brown.  Don't let them get too dark or they'll taste burnt.


Serving Corn Dogs
When the dogs are ready, I just put them out on a big serving plate next to a couple of open bags of chips and a stack of paper plates. I set out bowls to put the ketchup, mayo and mustard in rather than letting the guys dip straight out of the jars. That way, I don't have to throw away half a jar of mayo because my wife says, "I'm throwing that out. Every one of them had their hands in the jar and did you see any of them wash their hands once???" It just costs less to put it out in bowls. That way if someone dips his weenie in the mustard jar, you don't lose the whole jar. 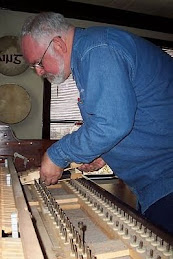 Fixin' the piano. Didn't know I could do that!

Come visit my store on CafePress!

If You Like This....share by clicking on the links at the end of each article.

A Word About Safety

Every time I repair the car, I give an offering of blood to the automotive gods in some way or other. My hands are pretty heavily scarred from a thousand little projects I've undertaken over the years. I'm actually pretty cranky about safety. It's just that I'm a congenital klutz. I'd like to remind everyone before undertaking any do-it-yourself project like these to be careful! Wear safety glasses when appropriate, take your time and make sure you use good tools, sharp knives and clear workspaces. Have fun. Try to keep all your fingers, toes, eyes and any other dangly body parts that could get nipped, sanded or clipped off.